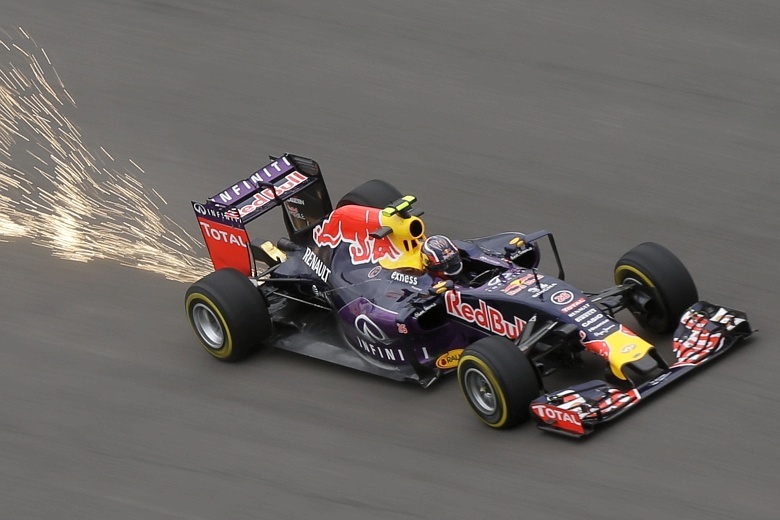 Red Bull are in danger of being squeezed out of Formula One by their two biggest rivals as the sport steers a perilous course to commercial suicide.

The four-times world champions and one of the biggest names in sport are on the brink of quitting F1 because they have no engines for next season. But the only engines on offer are with Mercedes and Ferrari — their fiercest competition on the track.

Far from rallying round to save a team popular with millions of fans around the world, Red Bull’s rivals were rubbing their hands yesterday as they prepared to cash in on their downfall. If Red Bull walk out, their prize money, worth as much as £75 million, would be carved up among the rest.

Mercedes and Ferrari could each benefit by as much as £13 million, while one source told The Times last night that Mercedes have made approaches to recruit some of Red Bull’s best staff.

Neither Lewis Hamilton, at Mercedes, nor Sebastian Vettel, who won four world championships at Red Bull before moving to Ferrari, want their teams to hand over full-power engines to the team most regard as the best on the grid. One Ferrari engineer said: “Why would we want to screw ourselves over by handing Red Bull our power? They could beat us hands down.”

Hamilton, who is on course to win his second world championship while the Red Bull threat has been neutered by underpowered and unreliable engines, also took a hard line. “It seems really odd to me that the moment they don’t have success, they are upset about it,” he said.

Toto Wolff, head of Mercedes motorsport, has made no secret that the loss of Red Bull would be Mercedes’s gain. Even Bob Fernley, deputy team principal at Force India and a champion of fairness in the sport, turned on Red Bull, telling motorsport.com: “F1 is bigger than Red Bull and it will continue. Within six months nobody will know who Red Bull were.”

In a sport ruled by avarice and self-interest, the swirl of politics was never deeper than in the gloom of the Sochi paddock on practice day for the Russian Grand Prix. There was no meaningful action on a track ruined by a downpour and a ridiculous diesel spillage, caused, ironically, by the track-cleaning truck. It would have been overshadowed by the pantomime off it anyway.

At the heart of this ludicrous squabble are the livelihoods of 850 talented and dedicated people at Red Bull’s headquarters factory in Milton Keynes. The millionaire bosses of F1 will not count that as a priority as they indulge in their negotiating brinkmanship, and nor will Dietrich Mateschitz, the cantankerous billionaire owner of Red Bull, if hubris overtakes commitment to a sport his team once dominated.

Christian Horner had the air of a man staring at defeat last night as he sat in the sanctuary of the Red Bull motorhome. The man who led Red Bull from fledgeling team a decade ago to four consecutive years of world championships was clear about his key objective.

“My priority is trying to find a solution for the 850 talented, hard-working people back at the factory,” Horner said. “It is a serious situation. “There will be constant meetings, I am sure, but we have no idea how long this will take or whether there will even be a solution.

“Dietrich has given a lot to this sport and Formula One without Red Bull would be a huge loss. Millions of fans support this team and they will not want to see it lost like this.”

Bernie Ecclestone, the F1 chief executive, is desperately trying to broker a deal with Ferrari to supply Red Bull next season. In public, Ecclestone was upbeat, saying that everything was “sorted”; in private, he just shrugged.

The commercial implications are huge: not only are Red Bull massive promoters of F1, but any potential sale of the sport by CVC Capital Partners, the controlling shareholder, would be undermined by the loss of one of the world’s biggest brand names. Meanwhile, investigators from the European Union competition commission could have a field day with a £1 billion sport unable to support its teams.

This time last year, Marussia and Caterham both collapsed; now Red Bull and Toro Rosso, their junior team, could be withdrawn.

But there is little sympathy for an outfit who were accused of arrogance as they swept up all the prizes for four years and then poured scorn on Renault, their long-term engine partner, when the French carmaker failed to adapt to the new era of hybrid power. Renault, a leading light in F1 for over three decades, tore up their deal with Red Bull and may also quit F1 unless they rescue the ailing Lotus team.

That has left Red Bull with only the choice of Mercedes or Ferrari to supply power. Talks with Mercedes failed at the first hurdle, while Ferrari are willing to supply their hybrid power pack, but only this year’s version, for 2016. Red Bull refuse to take an engine that will leave them uncompetitive for a third successive year. But there is no way out — it is take it or leave it time.

A source close to Ecclestone told The Times: “Mercedes and Ferrari have this sport by the balls. Without their co-operation, there is no Red Bull and why would they co-operate to help what many people regard as the best outfit in F1? Give them a decent engine and they will beat Merc and Ferrari. And you think they care if Red Bull walk away?”

2010 Vettel wins drivers’ title and Red Bull are the champion constructors for the first time, sparking a run of four consecutive driver and constructor titles

2014 The first F1 test in Jerez in February reveals Renault’s version of new hybrid engine is terrible. Horner’s criticism of his engine partner is searing. Vettel shocks his team by announcing he is quitting for Ferrari

2015 Renault and Red Bull end their partnership, leaving Red Bull and Toro Rosso, their junior team, without an engine maker after Mercedes and Ferrari both say no to supplying their rival